Or, in subtler terms, Mrs. Apokalypse is pregnant. Prayers are welcome, as are large amounts of cash (small bills, non-sequential). Also looking for a sleeper sofa ;-)

It's just not challenging enough, working full time, on call 24/7, with a wife and 3 young children, AND attending university half-time. Let's throw something else into the mix... how about a new baby!
Posted by Brother James at 6:29 PM 8 comments:

The furor this week was all about the Archbishop of San Francisco and a group of homosexual activists. Let's see if I can boil it down a bit: 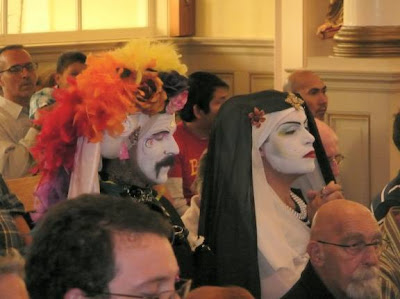 If your 'Sunday Best' is drag, you might be in San Francisco 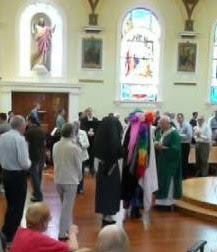 
And so, the drag queens did receive the Eucharist from the hands of Archbishop Niederauer. Video captured at the event shows a slightly befuddled prelate.

The catholic corner of the blogosphere was in full lather over the offensive display, and many, including myself, dropped a note to the Vatican urging an explanation. And lo and behold, a couple days later, an apology from Archbishop Niederauer:

At Communion time, toward the end of the line, two strangely dressed persons came to receive Communion. As I recall one of them wore a large flowered hat or garland. I did not recognize either of them as wearing mock religious garb...

Although I had often seen photographs of members of the Sisters of Perpetual Indulgence, I had never encountered them in person until October 7th. I did not recognize who these people were when they approached me.

After the event, I realized that they were members of this particular organization and that giving them Holy Communion had been a mistake.

I apologize to the Catholics of the Archdiocese of San Francisco and to Catholics at large for doing so.

Good enough for me.

Still, I would hope that the Archbishop will become more aware of the spiritual challenges of his archdiocese. After all, everyone knows that San Francisco is the Gay Mecca, with the Castro district being the core.
Posted by Brother James at 7:42 AM 3 comments:

I saw this news Item earlier in the week, a meeting in Ravenna, Italy, turns sour:

A delegation of the Moscow Patriarchate led by Bishop Hilarion of Vienna and Austria walked out of a meeting of the joint commission on the Orthodox-Catholic dialogue in the Italian city of Ravenna on Tuesday,

Not surprising, given the chilly relations between the two. As much as the Russian Orthodox fuss about Catholic proselytizing in Russia, at least Rome isn't leaning on the Italian government to expel foreign-born clergy.

But alas, the bug in Russia's bonnet is different this time:

During the Orthodox meeting, Russian Orthodox Bishop Hilarion of Vienna and Austria told the other Orthodox participants that his delegation would abandon the meeting if they did not ask the Estonian Orthodox delegation to leave.

well, that's not a very prime example of christian love for our brothers, is it? What resentment could lead to such uncharitable behaviour?

Hmm, okay, lemme see if I've got this right: Russia refuses to entertain the notion of the authority of Rome, but expects to wield authority over others. I see. Russia can be autocephalous, but christians in their territory, and neighboring areas, cannot be trusted to make their own religious decisions? They need to get over themselves.

I wouldn't be surprised if Estonians, tired of Russian political and military hegemony, aren't excited by the imposition of russian religious hegemony.
Posted by Brother James at 7:05 AM No comments:

Ok, I've been goaded into making these slogans available as bumper stickers. Here's the first

Death Penalty - Making sure that every inmate is a wanted inmate.

As CafePress won't let me have multiple offerings without paying the fee, I'll let this first one float for a while, then post others as interest would indicate.
Posted by Brother James at 6:59 PM 1 comment:

Some people criticise pro-life supporters as being hypocritical when it comes to the death penalty. 'Tis fair to expect a people that claims to believe in mercy to really extend it. I would, in turn, like to see abortion supporters be thoroughly pro-death, extending their logic about the unborn to capital offenders.

With that in mind, I give you: Pro-Choice Slogans for the Death Penalty.

Lethal Injection: Making sure every inmate is a wanted inmate.

My Prison, My Choice.

If you don't believe in Lethal Injection, don't have one.

Keep your defense attorney off my lethal injection gurney.

More submissions will be posted when you cough 'em up.
Posted by Brother James at 6:09 AM 4 comments:

The new bishop of Pittsburgh, David Zubik, talks the talk of the felt banner crowd:

In many ways we have to think outside the box and look for the ways in which the Holy Spirit is calling us to be church.

He speaks like an Episcopalian Marine Biologist. I hope that this does not bode ill for the Faith in Pittsburgh. They don't need any repeat's of this summer's nonsense on the river.

When asked about social justice, the bishop hits the chord on life issues:

The most important social justice issue is the fabric of respect for life from the first moment of conception to the point of natural death. We have to be able to have profound respect for life, no matter what the world may say about how disposable people are.

So, then, how will he deal with pro-abortion catholic politicians? Time will tell, especially in dealing with U.S. Senator Bob Casey (D-PA), who feigned a pro-life position before his election.

Bishop Zubik also appear to be on the anti-border bandwagon:

I am a little bit baffled by what appears to be a growing insensitivity to immigrants coming into our country. Whatever nationality we all are, we became part of this country because our ancestors were immigrants. Our country is a mosaic of different nationalities.