Ok, Ash Wednesday is here, time to kick off Lent. I have a couple penances for myself, one of which will be fairly obvious to you, dear reader. I'm going 'Net free for Lent, aside from whatever work may demand. No impulsive blogging, no cruising eBay, no self-inflicted outrages, et cetera, et cetera. Giving up chocolate is for sissies.
Our parish is hosting a series of lectures called "Vatican II and You", and being the Diocese of Lincoln, Nebraska, I'm sure that the program won't be listing too far to the left. I will, on Sundays, present my notes of these sessions in these pages for your reflection and comparison.
Good luck with your own penances.
Posted by Brother James at 8:08 PM 1 comment:

I'm calmer now, and as most of my readers know, I'm usually that calm voice of faithful reason. In discussion elsewhere, my concerns with supporting the regime of China we met with a scriptural argument. The commenter wrote not to get too upset because we should "render unto Caesar, what is Caesar's" and that the problems of China are complex and require nuance. No, he didn't say 'nuance', but the rhetoric was practically screaming it, and nuance has been the illness of catholicism in America.

Here's how I see the difference. I have to pay taxes to the USA and the State of Nebraska, at least so sayeth my W-2 and my Turbo Tax™ software. These taxes are required of my citizenship, and though I may not agree with everything that's done with my taxes, I still have to pay them.

I don't have to buy stuff made in China. I don't have to buy stuff from the businesses that are supporting the Chinese government's ability to cloister their people and opress them and often murder them. Chinese Catholics live under burdens that I can scarcely imagine struggling with, and while I pray that God gives them the grace to persist in their faith, I feel that I should not, in the name of desire for material comforts, assist in their persecution.

That's what it is, after all. If I want a new pair of sneakers, and I don't need them, then it's not really necessary that I have them. Even if I can rationalise 'needing' the sneakers, it behooves me that the expenditure is not used to further opress the people that made it. The same thing with toasters, spatulas, kitchen utensils, clothing, toys, and other non-essentials.

It may sound scrupulous, and maybe overly so, but in America our definitions of neccessities has broadened immensely. What are the degrees of cooperation with evil, and where should we draw the line? Do we have the courage to face down our 'need' for material things? 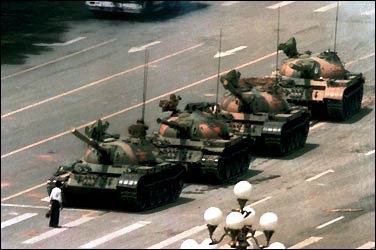 Here there be courage.
Posted by Brother James at 6:38 AM 2 comments:

Can we buy their freedom?

Is anyone else getting tired of hearing about events like this:

I'm really tired of seeing how catholics are treated in China, and having people speak about how engagement is going to bring change. Ok, you want change? Here it comes:

I ain't buying anymore of their crap!

99% of the time, the stuff made in China isn't a vital neccessity to everyday life, and so doesn't need to be purchased. Period. I'll continue to buy stuff made in Guatemala, Romania, or even Thailand, but not from China. I'll still get takeout from the local House of Hunan, but anything that says 'Made in China' is staying on it's shelf at the store.

I've already been weaning the chinese garbage from our normal expenditures, only when there are no alternatives will I buy their wares. I don't shop at Walmart anyway, so there's one less source of tension there.

If China thinks that I am being selfish, and that thier people will suffer if I don't buy their goods, I'll say this:

"Quit jailing my spiritual brethren! If you can let them live freely, then I will consider you fair. Until that day, you get squat from me."

Wow, I've been ranting, haven't I? So be it, but my challenge still stands. Can you go 'China-free for a Free China'?
Posted by Brother James at 2:27 PM 6 comments:

Jeff, o'er at 'The World According to Me' has a great post:

The third way to avoid being a hypocrite is what all of us basically good people do: we lower our standards. Rather than proclaim a way of life which we know we can't achieve, we justify our shortcomings. All we aim to be is basically good people. We do whatever wrong we do, but we tell ourselves that, since we're still basically good, it can't be that wrong. We try to be pragmatic: For example, since very few of us can claim to live perfectly sexually moral lives, and since we hate the thought of being labeled hypocrites, we lower the standard from sacred covenant to simple consent. Or, since very few of us are perfectly honest about all things, we tell ourselves "little white lies" aren't so bad.

Yes, perfection is to be our standard, not compromise, even as we ever fall short. We are all called to holiness and witness to perfection, a la Christifideles Laici:

Despite every difficulty, delay and contradiction caused by the limits of human nature, by sin and by the Evil One, the Church knows that all the forces that humanity employs for communion and participation find a full response in the intervention of Jesus Christ, the Redeemer of man and of the world.

Yes, the intervention of Jesus Christ, amen. That others become more holy than I, provided that I become as holy as I should be, may Jesus give me the grace to desire it.
Posted by Brother James at 11:20 AM No comments:

Take the quiz at dicepool.com

Who'd a thought? Yes, I am a recovering D&D player. It starts simple "Let's play Dungeon™, the board game". Next thing you know, you've got Planescape™ posters on your walls, and an entire bookcase of Forgotten Realms™ books.

h/t to, and nostalgic dyspepsia from, Regular Guy.
Posted by Brother James at 10:10 PM 3 comments:

Buying something without getting it.

from a 'spiritual swag' catalogue:


Now, wasn't the Buddha's whole schtick about non-attachment to material things, least of all attachment to the Buddha himself?
It seems the 'catholic cafeteria' extends to the 'world religion catalogue', where one can buy Tibetan prayer flags, celtic crosses, Shiva statuettes, Om pendants, and other such nonsense.
I'd be curious to find a muslim prayer rug that can double as a yoga mat..
Posted by Brother James at 10:18 AM 4 comments:

Just in time for St. Valentine’s Day, a poetic verseburst in defiance of that other “V”-word:

See, see the foggly sky
Marvel at its big puce depths.
Tell me, Jerry do you
Wonder why the chihuahua ignores you?
Why its foobly stare
makes you feel glaptid.
I can tell you, it is
Worried by your undeflastered facial growth
That looks like
A myconid.
What's more, it knows
Your scrobbly potting shed
Smells of olfactory slug.
Everything under the big foggly sky
Asks why, why do you even bother?
You only charm dead squirrels under decks.

-Prostetnic Vogon Jeltz
Posted by Brother James at 11:36 AM 1 comment:

Invoking Muhammad (Lord, have mercy on us)

I’ve got another idea.

Muhammad’s sins grieve our Father no more than our own sins, though his may be more notorious. So, I propose a protocol of praying for God’s mercy every time Muhammad’s name is invoked, reminding us to pray for his soul, along with the conversion of those who follow in his footsteps. Immediately append a (Lord, have mercy on us), shortened to (Lhmou) subsequently, or (Kyrie, eleison), and (Ke). I’m sure a Latin Rite buff can find me something shorter than ‘Ostende nobis, Domine, miserecordiam tuam’ to use in this instance.

So the usage would be as such: I have read that Muhammad (Lord, have mercy on us) was a murderer, a thief, and a paedophile, but really, who among us is that much better. We are all sinners, and should fervently hope for the salvation of even the most egregious sinners, like Muhammad (Lhmou). In praying for his salvation, we can exhibit true Christian love toward our enemy, and show that God’s mercy is available to all. Who knows, we may be surprised to see Muhammad (Lhmou) in Heaven after his penance has been worked out. Heck, I’ll be so surprised to eventually get there myself, that I wouldn’t dare begrudge it to another sinner.

See how it works? And it serves a multitude of purposes: Reminds Christians to pray for him, reminds muslims that he is a sinner and, out of love, we are willing to pray for him. And for the spiteful out there, I’m almost sure that us praying for Muhammad (Lhmou) will drive the Islamicists insane with rage.

Kyrie Eleison
Posted by Brother James at 6:26 AM 4 comments:

The traditionalist leader said that the SSPX would unflinchingly support the same arguments that drove Archbishop Marcel Lefebvre to break with Rome in 1988. He insisted that the Vatican moved away from Catholic traditions after the Second Vatican Council. "Rome seems to have lost its way," he said, and no accord would be possible unless the Vatican changed its policies.

There you have it, gang. "We're right, you're wrong, so don't ask us to change." Like his predecessor, Lefebvre, Fellay doesn't believe that the Holy Spirit guides, or is capable of guiding, the Roman Catholic Church. Despite the statements to the contrary on the SSPX website, the SSPX does consider itself the true Catholic Church, subconsciously, if not overtly.

I found an interesting article of a former SSPXer, "My Journey Out of the Lefebvre Schism", that offers argument to SSPX assertions that they are not excommunicated, and that there is no schism.

From the SSPX article "The Post-Conciliar Church...A New Religion?":

Our duty is not to condemn and excommunicate, but to help Catholics of good faith in the modern Church to make the necessary discernment, in order to totally abandon the new religion, embrace Tradition, and remain Catholic.

Sounds like schism to me, gang, but what do I know?

As always, keep praying that pride will not continue to interfere with participation in the Body of Christ.
Posted by Brother James at 5:23 AM 5 comments:

To Margaret Sanger's posthumous satisfaction, Abortion is having it's intended effects:

So, I hope that this gets shouted from the rooftops, all around america, so that black women can know how loved and cared for they are by the Pro-Choice lobby.

h/t Regular Guy
Posted by Brother James at 8:11 AM 7 comments:

Ha. I nailed my first birdie today! That's one UNDER par (for the non-golfing crowd).

It was a 165 yard par 3, and I put my tee shot just right of the green, on a small mound above the hole. 16 feet downhill with a right to left break, I chipped with my 8 iron, and watched it pop, bounce, and stroll to the hole.

Just thought I'd share that. Now, I have to go back to work and install some stuff in a studio.

In other news conservatives hashed, liberals gnashed, and eventually, everyone went to bed. Just another day.
Posted by Brother James at 6:38 PM 6 comments: