I'm not a macroeconomics wiz. I'm just a guy who wants to live within his means enough to provide a modest and comfortable life for his family.

I have a problem with the bailout, actually a couple problems.

Problem A) President Bush is selling it.

The last time President Bush went on about the need to launch immediate and costly action was with Iraq. Sure the sketchy-at-best intel suggested some danger, but it panned out poorly, and now we're on the hook to fix Iraq. We broke it, we bought it. And even many Democrats bought into the Iraq, which leads me to problem B:

Problem B) Democrat leadership is selling it.

If anyone is against the free exercise of commerce, it's usually Democrats. So then, why are they so eager to shore up an enterprise that they are hostile to? Because the terms of the deal will give Government more power over the Market. More Government, Bigger Government. And that's the likely reason that many Republicans are balking at the deal. Throw in the partisan diatribes on either side, and I'm not surprised that the public isn't buying it either.

Problem C) No one's taking ownership of the problem.

Politicians, Right and Left, are denying any culpability in the political push for risky mortgages and lax oversight. Businesses aren't taking ownership of the obvious flaws and greed inherent in the trade of dubious securities. Americans are awakening to the dawning horror that you cannot live beyond your means on endless credit.

Problem D) It has to happen NOW, or the planet Earth will implode.

I'm sorry, but I'd prefer decisions of this magnitude have well-thought out plans for execution and consequences of the action. I don't make expensive knee-jerk reactions when I can avoid it. See Problem A.

Problem E) This will take generations to recover from.

I am resigned to the idea that my children will likely be working harder and have a lesser standard of living that we do now. That said, I'd like a little hope that my grandchildren will not be even further in the hole. Still, my grandparents survived the Great Depression, and were much more frugal and generous than the current generation. Maybe hard times would be a good lesson for modern folks.

Like I said, I don't know squat about economics, but then again, that's not where I put my faith either.
Posted by Brother James at 10:23 AM 1 comment:

Barak Obama seems to think it's the people running the business:"We must protect taxpayers, not bail out the shareholders and management of Fannie Mae and Freddie Mac," he intoned. Wow, that's the same group of management and shareholders that donated $126,349 to Obama's campaign. I guess there's no loyalty in this business.

John McCain, early in the mortgage avalanche said “it is not the duty of government to bail out and reward those who act irresponsibly, whether they are big banks or small borrowers.” Once the scale of the problem came into focus, he eventually supported government intervention in the mortgage mess.

I'd like to take this opportunity to remind my fellow Americans that the reason that these mortgage companies, and related securities, are in such a mess is that people stopped paying their mortgages. With the default on this debt, american homebuyers were the start of this avalanche.

Both Republicans and Democrats alike were crowing about all the home purchases through looser lending standards. The banks are in a Catch -22: If you lend money to high-risk borrowers, you're a greedy capitalist, and if you have tighter lending standards, you excluding "deserving people" from the American Dream. Sounds like you can't win.

The shareholders and management of Fannie Mae and Freddy Mac, among other mortgage lenders, loaned money to homebuyers in good faith and expected the borrowers to honor their obligations. To vilify the lenders for the insolvency of the borrowers is ludicrous.

The most basic issue at the base of this mess will never be discussed. The urge to have more than we can afford, and lacking the honor to repay our debts.

The Bailout is for the deadbeat American Borrower.
Posted by Brother James at 8:34 AM No comments:

IT seems that when we label someone, objectivize them, the labels obscure their humanity. Once disassociated from their humanity, it becomes easy to allow terrible things to be done to them.

In early America, we encountered Native Americans, which we named as savages. Once we named them savages, it was easy to break treaties with them, allow the cavalry to kill men, women, and children. They were not human, they were "Savages".

During the same period, in America we had slaves of African extraction, which we named as Negroes. Once we named them Negroes, it was easier to work them hard, force them to live in squalor, to beat, harass and abuse them. They were not human, they were "Negro slaves".

In Germany, in the early 20th century, there were jews, which were called subhuman. Once they were labeled as subhuman, it was easy to harass them, take their businesses, and eventually herd them onto trains to take them to extermination camps. They were not human, they were "subhuman".

In Rawanda, tribal affiliations of Tutsi and Hutu were mutually used to disassociate each other from their own humanity. Once separated into Hutu and Tutsi, it was easy to isolate and slaughter each other. They were not human, they were either Hutu or Tutsi.

Also in America, now, we have embryonic humans, called "a blob of tissue". Once called a blob of tissue, it is easy to deny it rights and permit the extermination my chemical or surgical means. They are not human, they are just blobs of tissue.

There are countless other examples of how we deny humanity when we should be embracing it. Jesus came as Man, and in all humanity he is both needed and found. Just as when we feed the hungry, clothe the naked, and visit the sick and imprisoned, He is there. He is also there during a CIA interrogation or Dilation and Extraction abortion.
Posted by Brother James at 8:14 AM No comments: 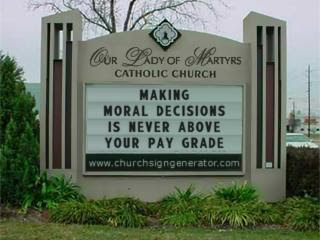 Posted by Brother James at 9:29 AM No comments: